Ashlee served as Trial Attorney in the U.S. Department of Justice, Fraud Section from 2013-2015 before being promoted to Assistant Chief in 2015. At the time of her promotion, she was the youngest person to have held the role. Among other responsibilities, she led the Health Care Fraud Strike Force—supervising seven prosecutors and overseeing complex fraud cases in Texas from 2015‑2018. In that position, and as a trial attorney before it, she led and supervised dozens of investigations and prosecutions of white-collar crime across the country and tried numerous federal jury trials involving hundreds of millions of dollars of fraud claims. For two consecutive years, Ashlee led the planning for the National Health Care Fraud Training Conference for hundreds of agents and prosecutors in Washington, D.C. and often trained new and experienced prosecutors on investigating health care fraud cases.

Ashlee’s work at DOJ garnered several accolades including the Health and Human Services (HHS) Inspector General’s Award for Integrity; HHS Inspector General’s Award for Excellence; IRS Criminal Investigation’s Recognition for Outstanding Support; and the Assistant Attorney General’s Award for Distinguished Service. Ashlee serves on the boards of several legal and social organizations, including the Federal Bar Association for the Southern District of Texas and the Association of Women Attorneys, and serves on the Planning Committee for the Leadership Institute for Women of Color Attorneys. She is committed to pro bono service and devotes hundreds of hours annually to serving her pro bono clients.

Patrice Childress is legal counsel at Exxon Mobil Corporation.  Prior to joining Exxon, Patrice was a partner at renowned litigation firm, Beck Redden LLP. Along with being asked to serve on the AWA Board of Directors, one of Patrice’s most outstanding professional achievements was this past year when she was named to Houston’s Top 50 Women in Law, by the National Diversity Council. She has also been recognized as a “Rising Star” in Civil Litigation – Defense, by Thomson Reuters Super Lawyers – Texas (2016-2017).

Patrice regularly lends her time and talents to active service on behalf of organizations and causes that are important to her in the Houston community, including St. Anne’s Catholic Church where her children attend school. She recently completed terms on the Board of Directors of the Texas Young Lawyers Association and the Interface-Samaritan Counseling Centers, Inc.

Brenda DeRouen is the managing attorney at DeRouen Law Firm, PLLC.  She provides premier legal representation to clients in high conflict matters involving criminal defense and family law litigation.  Brenda takes pride in her community and has a passion for criminal justice reform and the advancement of women.  Prior to starting her own firm Brenda worked for the Texas Department of Criminal Justice and the Texas Legislature as a policy advisor for the Honorable Senator John Whitmire (who is chair of the Texas Criminal Justice Committee).  There she contributed and developed initiatives related to major criminal justice reforms including the Micheal Morton Act and juvenile truancy laws. Click HERE to visit Brenda’s firm website.

She is the founder of two non-profit organizations: Project 4-Way an organization that provides scholarships and resources to underprivileged youth residing in rural areas; and @WomenofLaw: a social media platform designed to inspire, empower, and propel women forward in the legal field. She is frequently invited to speak on panels related to her work in the legal profession and has been featured on several news/radio stations to offer legal analysis and advice.

Brenda is a proud double HBCU graduate.  She obtained her undergraduate degree from Prairie View A&M University and her law degree from the historical Thurgood Marshall School of Law.

Kelly Turner is a partner at Jones Day where she advises clients in complex capital markets transactions as well as day-to-day disclosure obligations and corporate governance matters. Her experience advising a diverse range of companies and financial institutions spans a variety of public and private transactions, including 144A offerings, public high yield and investment-grade debt offerings, equity offerings, tender offers, exchange offers, debt restructurings, corporate reorganizations, and M&A transactions. Kelly also regularly advises public companies and other organizations on SEC reporting requirements, corporate governance matters, and stock exchange rules and regulations.  Kelly is a member of the Texas Bar Association and the Georgia Bar Association. She joined Jones Day’s Dallas Office in 2007 and worked in the Atlanta Office from 2010 until transferring to the Houston Office in 2012.

of Fogler, Brar, O’Neil and Gray, LLP. Michelle is an Aggie and attended the University of Houston Law Center, where she was Editor-in-Chief of the Houston Law Review and participated in mock trial.  After graduating as valedictorian of her law school class in 2011, Michelle clerked for the Honorable David Hittner in the United States District Court for the Southern District of Texas.  Prior to starting her current firm, Michelle was an associate at Beck Redden, LLP

Michelle is the President of the Friends of Child Advocates, a non-profit organization that supports Child Advocates through fundraising and volunteering.  In addition to her role on the Board of AWA, she is also on the Board of the Houston Law Review, and the University of Houston Law Center Alumni Association. Michelle has consistently been named a Texas Rising Star in business litigation since 2016 and was given the University of Houston Law Center Rising Star award in 2017. In 2021, Super Lawyers magazine named Michelle to both the Texas “Up and Coming 100” list and the Texas “Up and Coming 50 Women” list. Michelle was recently named a 2021 “Top Lawyer” in Professional Malpractice Defense (Non-Medical) by Houstonia magazine.

Michelle is the mother of two fierce little girls, Nora (6) and Jolene (3), and a wife to her best friend and high-school sweetheart, Buddy.  Aside from being in the courtroom or representing clients, she loves hosting friends and spending time with her family at the lake.

Dalia Castillo-Granados is the Director of the ABA’s Children’s Immigration Law Academy. She is a 2008 graduate of the University of Houston Law Center. Prior to working at CILA, Dalia was a Senior Attorney at Kids in Need of Defense, a Staff Attorney at Tahirih Justice Center, a Clinical Supervising Attorney at the University of Houston’s Immigration Clinic, and began her public interest career as a Greenberg Traurig, LLP Equal Justice Works Fellow with Catholic Charities’ Cabrini Center in Houston. During law school, Dalia was active in the Immigration Clinic and interned at US Citizenship and Immigration Services, Catholic Charities, and was a Public Interest Law Fellow at Boat People SOS. She was previously the chair of the State Bar of Texas’ Immigration Law Task Force. She is currently an Executive Committee member of the Houston Immigration Legal Services Collaborative, on the Board of Directors for the Houston Association of Women Attorneys, and she is the President of Latino Giving Houston, a giving circle devoted to promoting philanthropy in Houston’s Latino community. Click HERE to visit Dalia’s ABA bio.

Judge Manor is the presiding judge of the 80th Judicial District Court in Harris County, Texas.  Judge Manor was born and raised in New Orleans, Louisiana. Her mother was a nurse, and her father was a career officer with the New Orleans Police Department. Jeralynn studied philosophy at Xavier University in New Orleans before moving to Houston and finishing her undergraduate studies in Administration of Justice at Texas Southern University. She went on to Thurgood Marshall School of Law, where she earned the American Juris

Prudence Award in Bankruptcy under the tutelage of the Honorable Justice Manual Leal of the Southern District of Texas Bankruptcy Court. Jeralynn also won 1st place in the school’s mock trial competition.

Prior to taking the bench, Judge Manor’s experience in private-practice was expansive. She concentrated her early career as a closing attorney for 3 major title companies. In this area practice, Jeralynn played an integral role in helping thousands of Texans achieve the dream of home-ownership.

Even outside of her legal practice, Judge Manor is a leader in the community.  She has been in leadership roles with Boy Scouts of America as Den Mother to her son’s pack. She also served on the board of directors of The Black Heritage Society/Original MLK Parade Foundation. Judge Manor enjoys being a mother to her three children Taft (17), Rogdrick (13), and Brooklynn (7). Judge Manor instills into her children the same values of hard work, dedication, service to all mankind, and love, passed on to her by her father, the late Sgt. Jerome M. Dupre.

Judge Rogers is the presiding judge of the 334th Judicial District Court in Harris County, Texas. She is a native Houstonian, growing up in Northwest Houston. From the age of 9, Judge Rogers knew she wanted to be a lawyer, and after highschool she enrolled at Sam Houston State University to pursue a joint degree in criminal justice and English.  During college she was Vice President of the Phi Alpha Delta 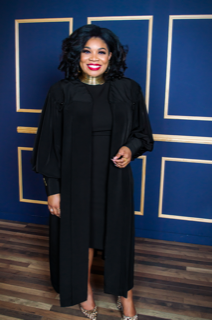 Pre-Law Fraternity, won second place in a major mock trial competition, and interned with the Harris County District Attorneys’ office, solidfying her desire to pursue a career in law.  Upon graduating from SHSU, Judge Rogers attended the Thurgood Marshall School of  Law.

During law school, Judge Rogers was an extern with the Harris County 189th District Court under Judge Jeff Work who, after the externship, extended her an offer as a paid student law clerk. Judge Rogers also interned with the First Court of Appeals and the Harris County Attorneys’ Office during law school.  Then, upon graduating with a J.D., Judge Rogers moved to Austin to work with the Attorney General’s Office as an Honors Attorney while she studied for the Texas Bar Exam. Soon, she was asked to take a position as an Assistant Attorney General in the law enforcement defense department.  While an Assistant Attorney General, Judge Rogers tried over fifty jury and bench trials in federal and state courts throughout the State of Texas.  Missing her hometown, Judge Rogers returned to Houston in 2004 and worked for a boutique defense firm representing corporate clients and municipalities in various areas of law, including personal injury, breach of contract, and construction law.  After several years, Judge Rogers opened her own law firm, D. Rogers Law Group, P.L.L.C., where she represented both plaintiffs and defendants in a wide-array of matters.  As a practicing attorney, Judge Rogers also worked as an administrative judge for the Texas Education Agency, an arbitrator for the Texas Comptroller, an ad litem for Harris County civil courts, a volunteer mediator for the Harris County Dispute Resolution Center, and an adjunct professor at Lone Star College campuses in Greenspoint and Acres Home,  teaching freshmen college preparedness, financial literacy, and professional growth.

In 2020, Judge Rogers was elected to be the presiding judge of the 334th District Court of Harris County.

Judge Rogers is the oldest daughter of her loving parents, a big sister to her two younger siblings, “Auntie Dawn” to one niece and four nephews, and mommy to her four-legged friend.  In addition to her work with AWA, she is an active member of Wheeler Avenue Baptist Church.

The AWA is made up of Houston lawyers, judges, and law students. Please visit our membership page for more information.

It is time to renew your AWA membership! Our year begins on September 1, 2021, and you can renew on the membership page.